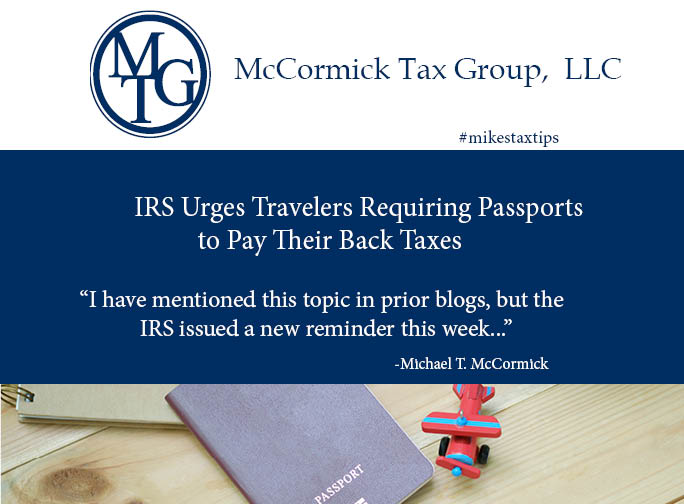 I have mentioned this topic in prior blogs, but the IRS issued a new reminder this week and I thought it couldn’t hurt to discuss the issue again. For seriously delinquent taxpayers, the IRS can now suspend a taxpayer’s passport if they continue to ignore the government. We do a lot of work with IRS in resolving taxpayers back tax debt, so I am always amazed when a situation like this arises. We can always work out a payment plan regardless of the size of the tax bill, and it is never a good idea to ignore the IRS. So, directly from the horse’s mouth:

IRS Urges Travelers Requiring Passports to Pay Their Back Taxes or Enter into Payment Agreements; People Owing $51,000 or More Covered

WASHINGTON ─ The Internal Revenue Service today strongly encouraged taxpayers who are seriously behind on their taxes to pay what they owe or enter into a payment agreement with the IRS to avoid putting their passports in jeopardy.

Taxpayers affected by this law are those with a seriously delinquent tax debt.  A taxpayer with a seriously delinquent tax debt is generally someone who owes the IRS more than $51,000 in back taxes, penalties and interest for which the IRS has filed a Notice of Federal Tax Lien and the period to challenge it has expired or the IRS has issued a levy.

There are several ways taxpayers can avoid having the IRS notify the State Department of their seriously delinquent tax debt. They include the following:

A passport won’t be at risk under this program for any taxpayer:

For taxpayers serving in a combat zone who owe a seriously delinquent tax debt, the IRS postpones notifying the State Department and the individual’s passport is not subject to denial during this time.

In general, taxpayers behind on their tax obligations should come forward and pay what they owe or enter into a payment plan with the IRS.