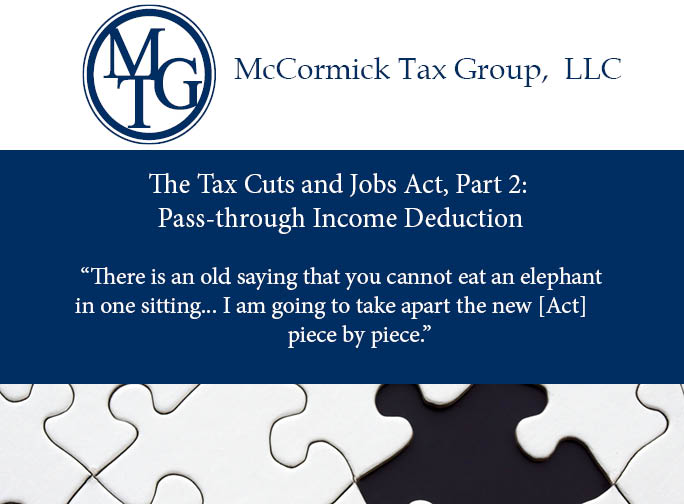 There is an old saying that you cannot eat an elephant in one sitting, so over the next few blogs, I am going to take apart the new Tax Cuts and Jobs Act piece by piece. I have been fielding a ton of calls regarding the Act’s effect on client’s LLC’s and S Corp’s, so today’s blog will address that issue.

Currently, owners of partnerships, S corporations, and sole proprietorships – as “pass-through” entities – pay tax at the individual rates, with the highest rate at 39.6 percent. The highest rate is reduced to 37 percent under the Tax Cuts and Jobs Act. The Act also allows a temporary deduction in an amount equal to 20 percent of qualified income of pass-through entities, subject to a number of limitations and qualifications. Conversely, the Tax Cuts and Jobs Act limits the deduction for excess business losses from pass-through entities.

Noncorporate taxpayers may deduct up to 20 percent of domestic qualified business income from a partnership, S corporation, or sole proprietorship (Code Sec. 199A deduction). A similar deduction is allowed for specified agricultural or horticultural cooperatives. A limitation based on wages paid, or on wages paid plus a capital element, is phased in for taxpayers with taxable income above a threshold amount. The deduction is not allowed for certain service trades or businesses, but this disallowance is phased in for lower income taxpayers. The deduction applies to tax years from 2018 through 2025. Caution. The Tax Cuts and Jobs Act provides rules that would prevent pass-through owners—particularly service providers such as accountants, doctors, lawyers, etc.—from converting their compensation income taxed at higher rates into profits taxed at the lower rate.

For individual taxpayers, the Code Sec. 199A deduction is not allowed in determining adjusted gross income. Further, it is not an itemized deduction, but it is available to individuals who itemize deductions and to those who claim the standard deduction. However, the deduction amount cannot be more than the taxpayer’s taxable income (reduced by net capital gain) for the tax year. The Code Sec. 199A deduction is similar to the domestic production activities deduction under Code Sec. 199, in that both allow taxpayers to deduct a portion of their “taxable income” if it is less than a portion of their relevant business income. Also, neither deduction can be claimed if the taxpayer has no relevant business income. It is anticipated that the IRS will provide a new worksheet or form for calculating the Code Sec. 199A deduction, similar to Form 8903, Domestic Production Activities Deduction.